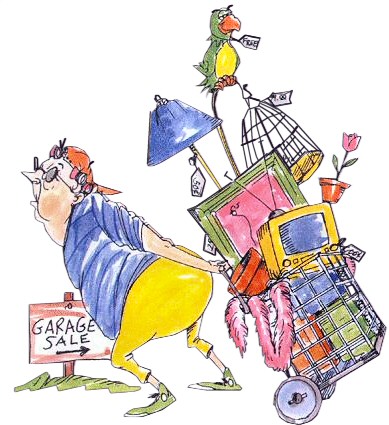 Yes, I had a yard sale yesterday. I don’t like to do yardsales, and I only made $15 on my “stuff,” but there was a Higher Purpose to the sale, and on that count, it was a huge success. I was following a prompting of synchronistic proportions. I have a friend who has a Very Hard Life. I check on her periodically and do what I can to help out. Last Tuesday I phoned her and discovered she is moving out of her apartment and moving into a trailer to share with a friend, as she can’t afford to live alone and pay the rent. She needed to get rid of tons of stuff that now won’t fit in the one bedroom she will be alloted in the trailer. We’re talking couches, tables, boxes of “stuff.” The catch–her landlord doesn’t allow yardsales where she lives. The Synchronicity? My community was holding its semi-annual yardsale in 4 days, and I would just make the deadline to register for it if I did so that very day. So I did. And I got another friend to come with his truck and haul her stuff to my place on Saturday. The heavens smiled in more ways than one, as we enjoyed a beautiful day of sunshine, good conversation with each other and the garage-salers who stopped by. She sold the bulk of her stuff, made $100+ in the bargain, and knows I really care about her. So, yea, I could have been doing tons of other things yesterday, but I followed the synchronicity to its successful conclusion.