Hurt Not The Earth 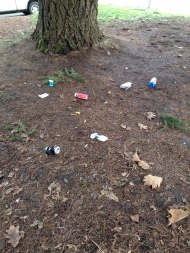 After School Let Out 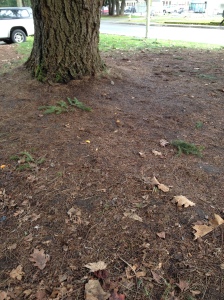 Before School let out

These are After and Before pictures of the gathering place around the tree at the edge of the library parking lot. Yesterday it looked a lot worse (than the AFTER) with an actual WHOLE PIZZA BOX in the mix. I brought out a trash bag and cleaned it up, so it looked like the BEFORE photo. Not 24 hours later, (right after classes got out at the nearby high school) it was back to this. I just don’t understand the lack of care and concern for the property of others displayed by people who litter. I know it’s easier to add to the mix when there is already something there, (thus my attempt to make it pristine again…) but this group of about 15 young men who hang out here between classes and after school, had no qualms about dropping their waste, only yards from a nearby trash can.

Ok, now for what I can learn from them…

Well, when confronted with the mess yesterday, they had no qualms also about speaking up and saying, “It wasn’t me…” “I’m actually a hippie-tree-hugger, myself…” They stood up for themselves. They weren’t about to be falsely accused. They were assertive. So, I guess “back when I was a kid” I would have been too intimidated by an adult to stand up for myself if I was falsely accused of something. I probably would have just burst into tears. (Well, maybe not as a teenager…). So maybe it wasn’t those particular gentlemen who littered that time, but SOMEONE did. And those are the ones I just can’t understand.

19 Responses to Hurt Not The Earth