W is for words

I’ve added lots of new words to my vocabulary through this study of the British Driving Code, some of which have been included in the various posts (Belisha, chicanes, droves, shunt, lorry, kickdown). Here are a few more that didn’t make it into specific posts:

Biting point: that moment when the engine gear takes hold as you slowly let out the clutch (in a manual shift car.)

Bonnet: British for the hood of the car. I admit that I was familiar with this term as well as the next one, but they were not incorporated into my vocabulary as they are now.

Boot: the trunk of the car.

Cabriolet: (ie. convertible) an automobile that can convert from a closed interior to an open-air vehicle.

Camber:  “the angle at which the road normally slopes away from the centre to help drainage. An Adverse camber is where the road slopes downwards towards the outside of the corner and the forces acting on your vehicle could cause it to leave the road more easily than on a normal corner. It may be counteracted by banking, where the slope of the road turns upwards towards the outside of the bend. ( page 132 of the Official DVSA Guide to Driving.)

Gantries: Electronic information signs positions above and across motorways

Hackney: taxi or cab. The etymology is interesting. It was thought that the word came from the French haquenee, which is a small horse. Others contend that the word came from the London district of Hackney…But Hackney District is known for being the location where these rides for hire began around the year 1025. So was the town of Hackney named for the small french horses because they had so many in use there for public conveyance, or were the conveyances named after the town? Definitely a chicken-and-egg conundrum. Across the pond in NYC, the term has been adopted, with the  “hack” (taxi or taxi-driver), “hackstand” (taxi stand), and “hack license” (taxi license) in common usage.

Tick-over: slow running of the engine, even when you don’t press the accelerator. This can be dangerous if you are stationary but not in Park or using a parking brake, as the car can still move forward without accelerating. 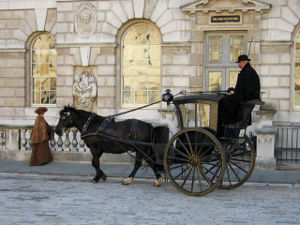 4 Responses to W is for words